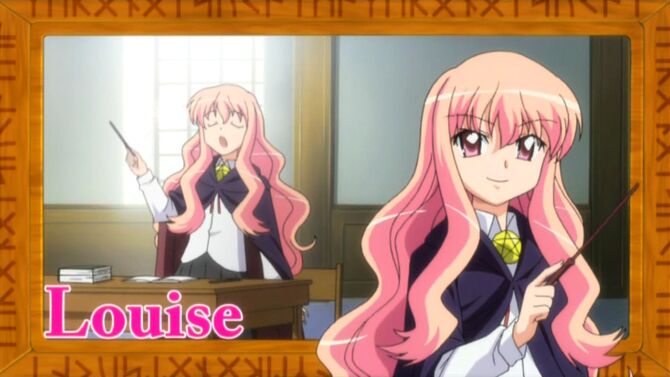 Louise is a second-year student at the Tristanian Academy of Magic. She is a talentless mage who is often ridiculed by her classmates, especially Kirche von Anhalt-Zerbst. Because every spell she casts fails, she is nicknamed Louise the Zero.

She summoned Hiraga Saito from Japan as her familiar. Believing him to be a commoner, she asked Professor Colbert to summon another familiar, but he denied her request. Continuing the ritual, she kissed Saito to form a contract. She did not initially believe that he came from Earth. However, she believed him once she saw him use the Staff of Destruction.

The new instructor Professor Chevreuse asked Louise to perform transmutation. Louise proceeded against her classmates' protests, resulting in an explosion.

Louise later found out that she was a void mage.

Louise traveled to Albion during Henrietta's campaign against Albion. She was ordered to fight the enemy until the end while the Tristanian forces retreated. Her familiar Hiraga Saito fought the enemy in her place. Later she became Her Majesty's court lady.

Louise became lady-in-waiting to Henrietta. Later, she became the heiress to the throne of Tristain.

Louise was engaged to Jean-Jacques, Viscount of Wardes from her childhood. The engagement was broken when Wardes' treason was exposed. She later begins a relationship with her familiar Hiraga Saito.

Louise is a descendant of Brimir through the royal house of Tristain, more specifically its cadet branch House of La Vallière. She is a distant cousin of Henrietta, the current Queen of Tristain.

Louise is based on Louise de La Vallière, a mistress of Louis XIV of France from 1661 to 1667, who later became the Duchess of La Vallière and Duchess of Vaujours.[2]

Retrieved from "https://familiarofzero.fandom.com/wiki/Louise_de_La_Valli%C3%A8re?oldid=4648"
Community content is available under CC-BY-SA unless otherwise noted.