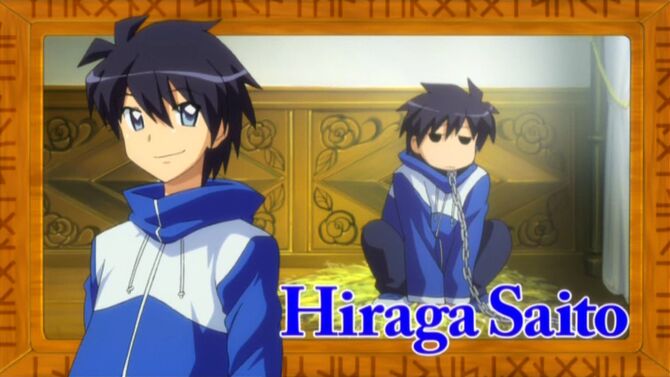 Hiraga Saito is the main male character of The Familiar of Zero.

Saito was born in Japan. He lived in Tokyo during his youth. Prior to his summoning, Saito was picking up his laptop from a repair shop in Akihabara. When Louise de La Vallière summoned her familar, a portal appeared in front of Saito. Because of his curiosity, Saito touched the portal and was pulled through. When he arrived on the other side, he was thoroughly disoriented. His contract with Louise was then sealed with a kiss.

In the anime, Saito could not understand the language that Louise spoke. After Louise's attempt to cast a silencing spell failed, he understood the language as Japanese. It is not clear whether the spell gave him knowledge of the language, or if it acted as a universal translator.[1] In the light novel, he identifies the language as French.

Once Saito became Louise's familiar, he was expected to obey her as a servant. He once attempted to escape, but was caught. Despite his claim of coming from another world, his protests were dismissed. Due to Saito's apparent lack of any special ability, he was employed for domestic work.

Saito dueled with Guiche de Gramont, during which he discovered his ability to wield a weapon at will. Louise then buys him a sword, a talking sword named Derfflinger.

Soon after Saito's arrival, the thief Fouquet stole the Staff of Destruction from the Tristanian Academy of Magic. Once Louise and Saito's party retrieved it, Saito demonstrated his ability to use the weapon.

Saito followed Louise to Albion during Henrietta of Tristain's campaign against Albion. When Louise was ordered to fight the enemy until the end, he stays in Louise's stead, managing to hold back an army of seventy thousand.

For his service to Tristain in the war, he was awarded the title of chevalier.

For his continuing service to Tristain, Henrietta considered creating Saito a baron. However, due to opposition from the nobility, she refrained from giving him a title. Instead, she awarded him land in Des Ornières.

Saito is in a relationship with Louise de La Vallière.

Retrieved from "https://familiarofzero.fandom.com/wiki/Hiraga_Saito?oldid=4991"
Community content is available under CC-BY-SA unless otherwise noted.